Back To School Traffic Issue on Espola Road 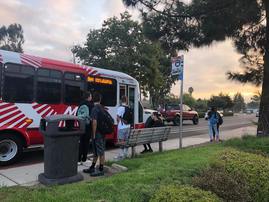 Torrey Lee Powers‎ -to- South Poway Votes I have been collaborating with MTS and the City to find a solution to getting our kids to PHS on time. Currently the kids who take the MTS bus to school are arriving very late. MTS has been very co-operative and has requested a meeting with city staff to solve the problem. Unfortunately, my many phone calls are insufficient to get the City to meet with MTS. I need your help. Please send a message to the city manager and your councilmember and ask them to set up a meeting immediately with MTS. Let’s work together to get the kids to school on time! Tina White City manager twhite@poway.org Wendy Asst. City manager wkaserman@poway.org
​​

Steve Dryer Oct 19, 2016  Poway City Council members unanimously agreed Tuesday night to have the San Diego YMCA proceed with a marketing survey to obtain public reaction to the possibility of a branch being built in Community Park.

The council made no commitment beyond having the survey completed, at the YMCA’s expense. The organization is proposing that it build a branch building at an estimated cost of about $9 million as an alternative to the city building a new community center at the same location for about $20 million.

The marketing study would help determine whether there is a need for a branch, what programs are needed, what services should be offered and whether local families would be willing to join the organization. The survey will include 600 to 800 randomly selected households, cost the YMCA $30,000 to $40,000 and take up to three months to complete. Results of the survey will be made public.

The city has for many years been exploring the idea of replacing the aging Community Center and Senior Center at the park and combining the two functions into a new center that would be named in memory of former Mayor Mickey Cafagna. The council has selected a mission-themed design concept and allocated $8 million in budget reserves, to be supplemented by the issuance of revenue bonds. However, city officials are now worried that the soaring cost of the building and the related costs of annual payments on the revenue bonds may place a burden on the city’s general fund.

Before voting to proceed with the study, the council heard from a handful of audience members, most of whom said they preferred the city proceeding with a new building of its own rather than working out an arrangement with the YMCA. Issues cited included seniors being unable to afford monthly YMCA fees, the loss of city jobs and the fact that the YMCA pays less for the same positions and a feeling that the YMCA building would not be as available as the current Community Center for community and private events.

“Not a single member of the Senior Center supports this,” Executive Director Leslie Hoffman told the council.
Torrey Powers, a fourth-generation Powegian running for a council seat, said her family sold the land now used by the community center to the city for use by the community. She noted the Senior Center charges $35 a year for membership while the YMCA would be charging about $470 per year. She questioned the impact of a fully equipped fitness center on local fitness centers and questioned whether the YMCA would be receptive to allowing the branch to be used for community events.

“It’s just not the right fit,” Powers told the council.

Mayor Steve Vaus said the proposed survey represented “a terrific opportunity” to obtain data on what the community would like to see in a new Community Park center, regardless of whether it is built and operated by the city or YMCA.

Assuming the role of a skeptic was Councilman Dave Grosch. While going along with the survey idea, he noted the city’s system of providing services at Community Park is “not broken” and that the city should look at downsizing its proposed 36,000-square-foot center in order to save costs. Many of the center’s potential users live in low- and moderate-income housing in the area and might not be able to afford YMCA dues and program fees, he noted.

Councilman John Mullin speculated that if the city and the YMCA can’t reach an agreement, the city’s “fallback” would not be to the current center design due to its high cost. Allocating $1.1 million a year in general funds to debt service just won’t work, he said.
​
Mullin did obtain from a YMCA representative an assurance that a scholarship program helping residents who can’t afford fees could be supplemented by city funds.